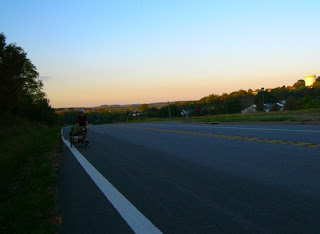 It's been a long time since our last post. Too long...but it has really flown by. Since the end of August we have been so busy it has been hard to believe we even have something interesting to write about. Of course there are the beautiful root veggies we are harvesting, the garlic we are ready to plant, and the beds we are putting to rest for the winter. We have a new bee hive, our friends got even more goats, and our chickens have been laying more and more eggs each day (up to 42 eggs! -- per day!)
But aside from those things, there is one exciting thing that we really wanted to share. Last Saturday we decided (sort of on a whim) to bike to the farmers market. Yep, we did it! Shawn has a new cart for his bike that he found on craigslist. It is pretty awesome. It is meant to tow kids, but you can fold the back down to make it more convenient to tow other things. A day or two before, he piled it high with the tent and tables, empty boxes and bins to go for a trial ride. 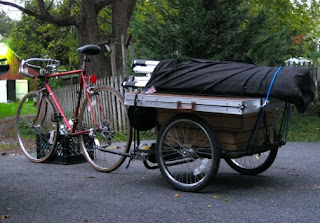 Aside from one or two impossible hills, which incidently are impossible without a trailor full of veggies, he discovered it is doable!
We got up extra early, it was crisp and dewey, the sky was pink. We loaded his cart with turnips, chard, radishes, eggs, and all the rest of our veggies. We put the pumpkins and beets in the bin on my bike in hopes of saving him from some of the weight. 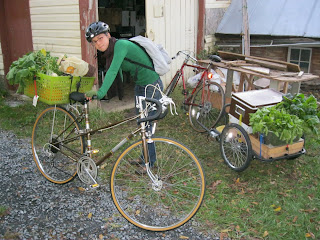 We hopped on the bikes and started pedaling. About 10 feet down the driveway, my bin fell off. For no reason. After several failed attempts to secure it, we got a bag and put most of it in there and had much better luck.
Off we went, finally, up and down the hills 6 miles to market. We made it right at 8. No better way to wake up than a crisp bike ride to sell some vegetables! 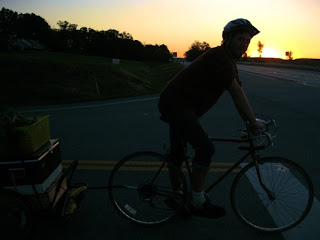 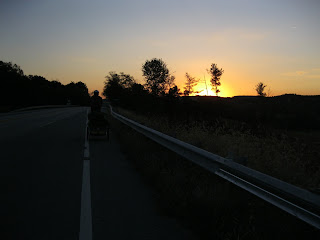 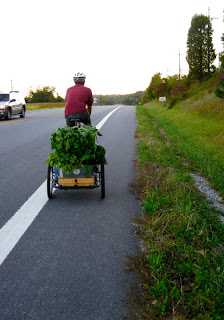