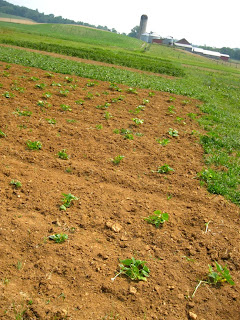 The last few weeks have been virtually rainless. It's tough on the plans and tough on us! We have been watering as much as possible and are upgrading our system from last year with a pump and soaker hoses. It will make it a lot easier. (And hopefully faster.)

Because most of our plants are somewhat thirsty they are also a bit weakened and therefore more susceptible to pests. One of the worst infestations we have right now is the Colorado potato beetle. We have spent many hours picking, plucking, squishing, and smashing these guys and it seems to be working!

Here I am after 3 hours of potato beetle duty in 100 degree heat: 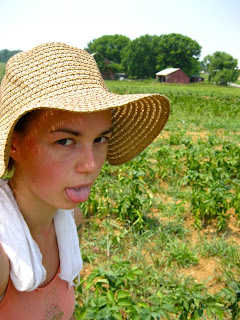 Anyway, most of our plants remain healthy. They have started to bloom and their small white and purple flowers are so pretty. 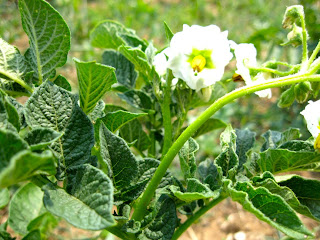 Unfortunately, each row has a few plants with beetles. Here is what we've found: 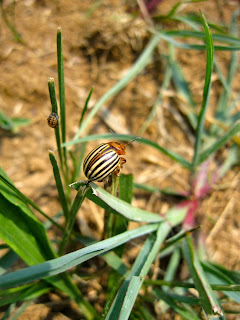 This is the larvae just after hatching. They come out of a little cluster of yellow eggs. Not so gross right? If you rub your thumb across them a couple times it pretty much wipes them out. 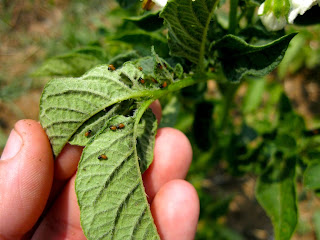 This is them when they get larger - yuck! I will spare you the details of what it is like to squish them. You can see all the damage just from these three buggers. They get huge so fast, you can see the difference when you compare them to my hand in both pictures. 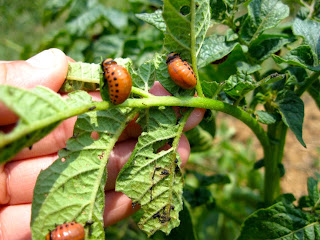 And then finally the adult. We don't end up seeing too many adults, but when we do find them, we also find eggs somewhere in the vicinity. 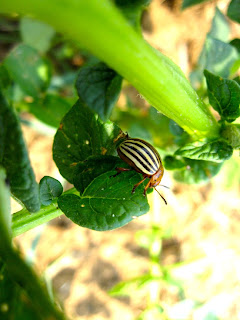 They don't multiply super fast which is why we have managed to stay ahead of them. But don't let it fool you. They are voracious eaters. Here is a healthy plant with no beetles: 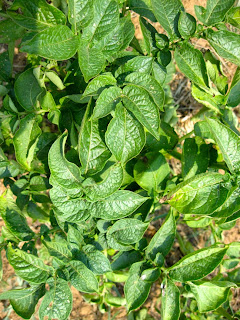 Here is a plant we overlooked: 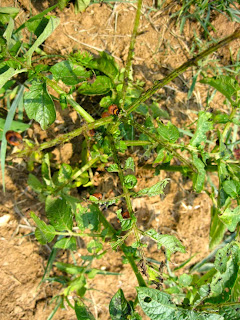 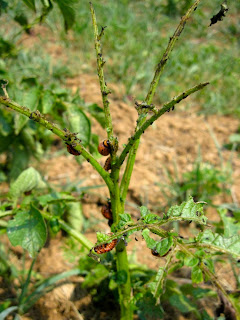 I think this guy is confused... 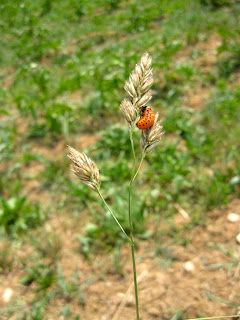 Although it is frustrating, we are not alone in our potato beetle battle! We have some friends keeping tabs when we aren't around. Like the two-spotted stink bug: 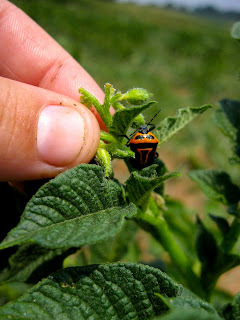 Not all stink bugs are bad, these are predatory stink bugs and suck the insides right out of the potato beetle larvae! Gross, yes, but also great.

We also saw a few of these, they too love to feed on potato beetle larvae: 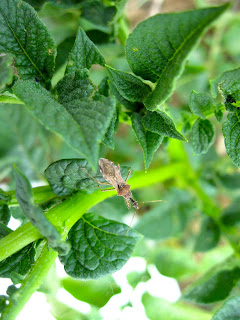 They are called Assassin Bugs...yes...such a good name.

Lady beetles will feed on potato beetles, but we haven't seen as many of those. I think they are all in our high tunnel eating our aphid population. They have kept really good control in there.

Hopefully we will continue to keep our potato beetle population under control, so far so good!