Today we went on a tour of the White House gardens! Linda's long-time friend, Lois, offered us tickets and we couldn't pass them up. Thanks Lois! Shawn's parents were able to come too which made it even more fun!
It was really chilly today but the sun came out just for us while we made our way around the First Backyard. Oh! And we saw the First Dog, Bo, before we walked in. He was being walked by the First Dog Walker, he peed in the ivy behind the security booth. I didn't get a picture, but it was exciting anyway! 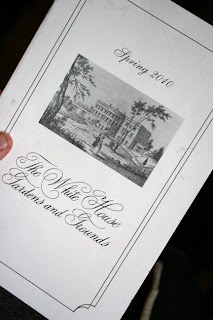 It was pretty crowded but the lines moved quickly and we were able to see everything we wanted to see. We haven't ever been on the White House grounds before so it was fun to see everything up close. It was all so neatly manicured. 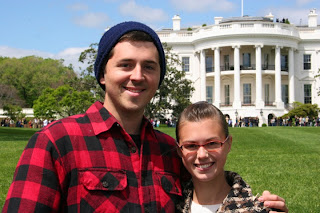 There were beautiful wisteria vines crawling up the railings next to the one of the oldest trees on the property: a southern magnolia planted by Andrew Jackson in 1830. You can only see a branch peeking into this picture, but the tree was so big and so old they had to hold most of it up with a giant pole and several wires. 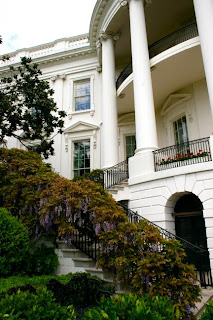 Here is Shawn "The Tourist". This was one of the most beautiful parts of the property. It is the Jacqueline Kennedy Garden. We especially liked the ornamental kale they featured under the tree. I can't imagine living here, though, it seems like you would never really feel at home. Especially with hundreds of people walking through... 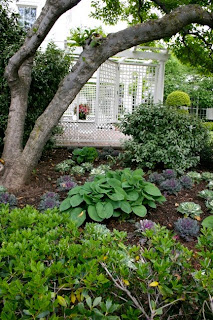 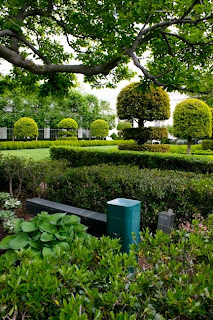 Finally! The First Kitchen Garden...this feels a little more homey. Actually, a LOT more homey. They had all the spring veggies growing: the First Chard, the First Broccoli, the First Onions, the First Lettuce, and lots of herbs. It's a decent size and they do a smaller scale bed and trench set up as well. The little signs they had identifying what was growing in each bed were cute too, they looked hand-made. 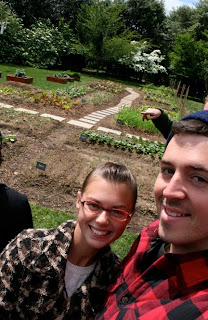 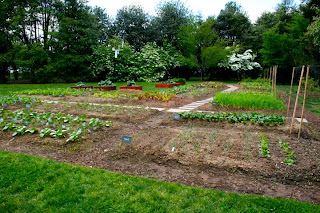 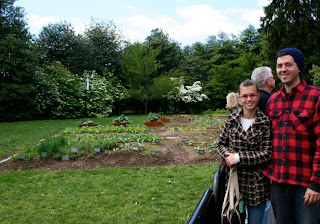 Last but not least, the First Beehive. It's a big one! Two deep hive bodies and three supers...no wonder they got so much honey last year! It was in a really pretty spot under two trees just behind the kitchen garden. 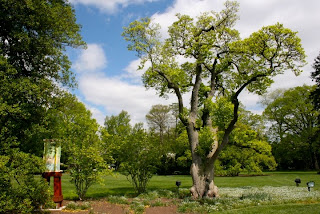 We are so glad to see the Obamas show that you can mix fancy manicured lawns with growing some of your own food. And keeping bees!
Posted by Truffula Seed at 6:03 PM