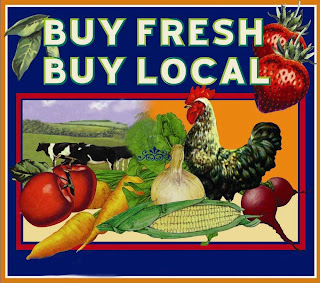 At the heart of every successful Farmers’ Market is an unspoken understanding between the customers and the vendors; an understanding that the farmers grew the produce that they are selling, the bakers baked their breads, and the ranchers raised their meats. This understanding allows the customer the comfort of knowing that all of the food for sale was grown locally and picked at its peak, and it gives people a chance to meet the folks who grow their food and the opportunity to better understand how they do it. The Farmers’ Market is set apart from the aisles of the grocery store by that shared understanding, and by the sense of community and transparency that it creates.
Of course, if someone wanted to, they could easily exploit that understanding; it could be as simple as buying a dozen different kinds of produce from Sam’s Club, setting up a stand by the side of the road, and putting out a sign that says “Farm Fresh Local Produce.” It’s hard to believe, but that’s exactly what someone did this past Saturday, one block from the Downtown Westminster Farmers Market! All of us farmers and vendors watched in horror as some guy unloaded boxes of produce from the back of his truck, (boxes which, mind you, still bore the name of the international produce distributor from whom he bought them), and sold them to people who I’m sure thought that they were buying locally grown produce.
The good news though is that it’s easy to distinguish between guys like that one and legitimate Farmers’ Markets. Real Farmers’ Markets will usually have a ‘Producer-Only’ policy, which means that the market requires that its vendors sell only what they grow, raise or make on their own farms. All three of the Farmers’ Markets that we sell at – the Downtown Westminster Market, The Westminster Tuesday Market, and The Crossroads Market – have very strict producer only policies. If you are not sure whether the market that you shop at is producer only, just ask the Market manager or a few of the farmers – they’ll be happy to tell you.
In the meantime, for those of you who shop at the Downtown Westminster Market, you might want to avoid the man down the street who is selling watermelons out of the back of his truck – unless of course, you want a watermelon that was picked a few weeks too early and flown here from Vietnam. But if that’s really what you want, you might want to check Sam’s Club instead, I hear that they have a deal on them. Ask the guy with the truck – he can tell you all about it!
Posted by Truffula Seed at 3:01 PM